Weeping Statues : are statues that have the ability to display certain aspects of human behaviour, such as weeping or bleeding.  There have also been reports of paintings that can exhibit this unusual phenomenon.  Although this phenomenon is not exclusive to the Catholic Church, most of its reports in the past have tended to originate from Catholic countries in Europe.  An example of a weeping statue is contained in the newspaper report below.

"A six-inch-high porcelain statue began weeping tears of blood. The liquid staining the image is genuinely blood, and human at that. The Santiago coroner's office pronounced the substance is type O-4 human blood. The statue weeps regularly, particularly in the presence of children."

It was confirmed by doctors attached to the police Criminal Investigation Department that the mysterious red liquid, which flows from the eyes of a statue of the Virgin Mary belonging to a Chilean woman, is indeed human blood. It was stated by Dr Inelia Chacon that three samples of the liquid examined in a laboratory were shown to be blood.

The small blue and white porcelain statue belongs to Olga Rodriguez, a housewife from the working class La Cisterna district in the south of Santiago. Since 14 November, when the tears of blood were seen for the first time, the modest home of Mrs. Rodriguez has become the main attraction for residents of the district. The Church has refused to take up a position concerning this strange phenomenon. (From: L'Impartial, Switzerland). 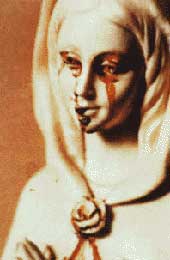 In his book, The Unexplained by Doctor Karl P.N. Shuker, there is mention of a chemistry researcher called Dr. Luigi Garlaschelli from Pavia University who published a paper in: Chemistry in Britain - that revealed how to create an effective weeping statue.

An except from this is as follows:
"What is needed is a hollow statue made of a porous material such as plaster or ceramic.  The icon must be glazed or painted with some sort of impermeable coating.  If the statue is then filled up with a liquid (surreptitiously, through a tiny hole in the head, for example), the porous material will absorb it, but the glazing will stop it from flowing out.  If the glazing, however, is imperceptibly scratched away on or around the eyes, tear-like drops will leak out, as if materialising from thin air.  If the cavity behind the eyes is small enough, once all the liquid has dripped out there are virtually no traces left in the icon.  When I put it to the test, this trick proved to be very satisfactory, baffling all onlookers."

Although this explanation goes part way towards solving the mystery of weeping statues, it does not explain how some statues weep real tears.  However a physicist called Shawn Carlson from the Lawrence Berkley Laboratory in California announced in 1987 that he had devised a method to make statues and paintings weep real tears.  He demonstrated a weeping Mona Lisa in public. The potential value however of producing novelty weeping icons has prompted Dr. Carlson to keep his methods secret until the technique has duly been patented.

DISCLAIMER
The images on this site were taking from publicly available sources, and to the best of my knowledge the images are in the public domain. If you do own the copyright to any of the images contained on this site, and can provide proof that you own the image/images, it/they will be withdrawn if desired.  However permission is asked to continue using any image/images which you may own. Thanks.