Januarius  :  or St. Januarius as he is better known, was born in Italy and was bishop of Benevento during the Emperor Diocletion persecution. He is also the patron saint of Naples in Italy.  Bishop Januarius went to visit two deacons and two laymen in prison. He was then also imprisoned along with his deacon and lector. They were thrown to the wild beasts, but when the animals did not attack them, they were beheaded. What is believed to be Januarius' blood is kept in Naples, as a relic. It liquefies and bubbles when exposed in the cathedral.

St. Januarius lived and died around 305 A.D. and his feast day is September 19th, the same day that his blood is said to liquefy.  The same is also said to happen on the first Saturday in May.  Whenever the blood fails to liquefy the local people believe that disaster looms.  Thixotropy is sometimes offered as an explanation for the phenomenon of blood that liquefies. Indeed some scientists have made their own "blood" that congealed and liquefied.  it was done using chalk, hydrated iron chloride and salt water. 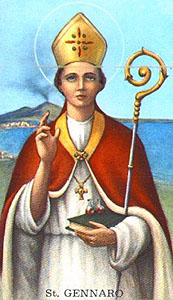 DISCLAIMER
The images on this site were taking from publicly available sources, and to the best of my knowledge the images are in the public domain. If you do own the copyright to any of the images contained on this site, and can provide proof that you own the image/images, it/they will be withdrawn if desired.  However permission is asked to continue using any image/images which you may own. Thanks.

Useful Links
Better Blood Through Chemistry: Laboratory Replication of a Miracle
The Catholic Encyclopedia
The Life of St.Januarius