Ica Stones   :  are located high up in the Andes Mountains, the "Rockies" of South America, in one of the more arid regions of Peru called Ica.  They comprise of a number of rocks which very in size from a tennis ball to twice the size of a football.  They are made out of andesite, this is a very hard mineral that would be difficult to carve with primitive tools.  These stones are also covered with a natural varnish created by bacteria over thousands of years. It is by scraping away this dark natural varnish to reveal the lighter mineral beneath that the etchings are made. Some examinations of the stones show that the grooves of the etchings also bear traces of additional varnish, indicating that they are very old. They contain pictures of primitive fish, ancient Indians using what can only be described as modern technology and dinosaurs.  These images are all etched by hand.  Although highly fascinating, the age of the rocks cannot be verified due to a lack of organic material, this tends to add to their mystery.

The Ica Stones first gained the attention of the scientific community, when a local physician called Dr. Javier Cabrera was given a small carved andesite rock as a birthday present from a poor native.  On learning that the doctor was somewhat intrigued by the stone more and more locals began to bring him similar carved rocks, collected from a river bank close to the famous Nazca lines.  Dr. Javier Cabrera was soon the proud owner of over 15,000 stones with many unusual scenes.  The scenes certainly proved to be an anomaly with many scenes showing dinosaurs such as stegosaurus, apatosaurus and triceratops.  There were humans riding on the backs of flying pterodactyls, men observing the heavens through what appeared to be telescopes, people performing open heart surgery and cesarean section births.  They were even pictures of men hunting and killing dinosaurs.  The reason that these images were so contentious was clear; modern man is thought only to have existed since around 2 million years ago, compared to the dinosaurs who became extinct around 60 million years ago.  This meant that either dinosaurs where either existing alongside humans or the stones were nothing more than a hoax. 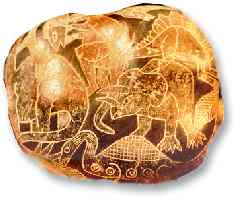 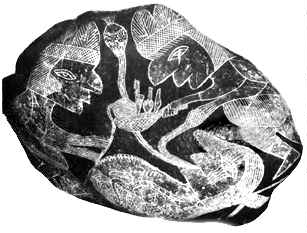 DISCLAIMER
The images on this site were taking from publicly available sources, and to the best of my knowledge the images are in the public domain. If you do own the copyright to any of the images contained on this site, and can provide proof that you own the image/images, it/they will be withdrawn if desired.  However permission is asked to continue using any image/images which you may own. Thanks