Usually before I go out to do research at a cemetery, I think its a good idea to go there and check it out during the day. That is, to see if you need to get permission to be there at night or just maybe let someone know why you are out there at night walking around with your cameras and equipment. This particular day Donna had found a fairly small cemetery no bigger than a half acre. We decided we would go to check it out, planning on returning that night.

Due to various factors, I have found that we get much better photos at night. Plus there are usually not people there to interfere with the investigation or questioning of your motives.

I have learned a big percentage of people have experienced some sort of paranormal activity in their life. But as soon as you mention the field of study you are in, they get a little freaked out. You will also find more people out there who would like to try everything they know to discredit a photo than to accept it for what it is. I've gotten quite used to this. The photos tend to speak for themselves.

This particular early afternoon, we were shooting a few photos to compare with our photographs to be taken later on that night. Also cleaning up the area a little while there is always a good practice I believe. Jimmie was off by himself in the older section, walking around and cleaning debris in the area. Born with psychic abilities, he is a very sensitive person really tuned into his surroundings. I could see he was over there cleaning and talking to what appeared as thin air, which made me decide I should take some pictures of him.

The pictures above and below are one of the results. The apparitions head is peaking up out of the ground directly behind him. If you blow this part up it appears to be a man wearing some sort of floppy cowboy style hat.

The man who rests there's grave though not dated is in a area that appears to be around the early nineteen hundreds by the dates on headstones around him. This photograph was taken in Arizona, early in the afternoon in March. The weather was beautiful, a couple of small clouds, no precipitation, and in the low 70's.

Make sure you check out the newest photograph taken two years later~ Photograph of Little Girl spirit right of Jimmie taken by, Theresa Jodray - July 2002, Arizona on the guest-book's page its amazing... 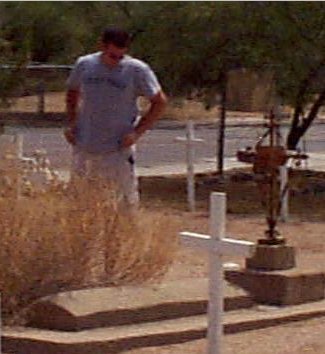 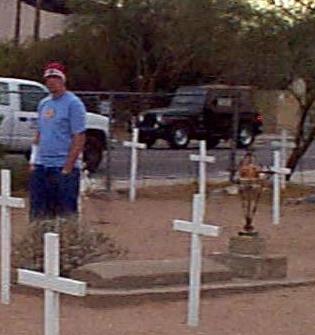