Big Foot  : is the name given to a creature or creatures, thought to exist in wild and remote parts of North America.  These creatures are commonly referred to as Big Foot, but are known also as: Sasquach, Skunk Apes and Swamp Apes.  Apparently the first sighting of a Sasquatch by a white man happened in 1811 near what now is the town of Jasper, Alberta Canada. A trader called David Thompson found strange footprints, fourteen inches long and eight inches wide, with four toes, in the snow.  To date scientists continue to be defied by this creature and it has still not been positively identified by scientific authorities.  The animal is generally described as being large, hairy, around seven to nine feet tall, weighing between 600 and 900 pounds and ape-like in appearance, yet walking upright like a man.

In Canada the bigfoot is more often referred to as the Sasquach, which is Indian for "hairy giant" and the term is mentioned in several native American legends.

There is some evidence in the form of film footage, photographs, and casts of footprints to suggest that Big Foot or Sasquach exists.  However skeptics insist these are simply clever hoaxes.

In 1967 Roger Patterson took film footage of a large hairy creature reported to be a Sasquatch.  However, there has been much speculation that it may have only been Mr. Patterson's tall associate Jerry Romney wearing a fur suit.  See also the abominable snowman or yeti. 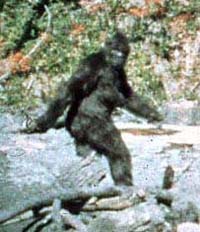