Bible Code : a computer program that is designed to look for key words in the Bible that are hidden in a form of code.  Since it's discovery by an Israeli mathematician Dr Eliyahu Rips, a leading expert in 'Group Theory' namely the underlying branch of mathematics to 'Quantum Physics'; the Bible Code has attracted much interest. Details about the Bible Code hit the headlines when a book was first published about it in Great Britain, by Weidenfeld and Nicholson in 1997.  The author of the book titled 'The Bible Code' is Michael Drosnin, a reporter who was formerly at the 'Washington Post' and the 'Wall Street Journal'.  Michael Drosnin lives and works in New York City and he is also the author of the 'New York Times' bestseller 'Citizen Hughes'.

Since it's publication in 1997 'The Bible Code' has gone on to become a number one bestseller with the sequel the 'Bible Code II' following shortly after.

"Rise of Hitler, man landing on the moon, the Kennedy assassinations and the Gulf War".

Indeed, according to Michael Drosnin:

"In a few dramatic cases, detailed predictions were found in advance - and then happened exactly as predicted."

Possibly two of the factors which helped in the success of the book by Drosnin is that it:

"Is the first full account of a scientific discovery that may change the world, and it is also told by sceptical secular reporter."

The fact that the code has also been verified by a number of famous mathematicians at Harvard, Yale and Hebrew University, has all helped to add weight to it's credibility.

In the book, it is stated that the code has been:
"replicated by a senior code-breaker at the US Department of Defense.  It has passed three levels of secular peer review at a leading US math journal."

The whole idea that there may be a special hidden code somewhere in the text of the bible is by no means a new one.  Isaac Newton was still searching for the Bible code when he died.  Indeed he is said to have likened the Bible to: "a cryptogram set by the almighty".  Sadly for him the code continued to elude him right up until his death.

Dr Eli Rips believes that he has succeeded where Isaac Newton failed. His success has been mainly due to modern technology, or more specifically the computer.  Drosnin even goes one step further and suggests that perhaps to code was deliberately coded in such a way that it would not be possible to crack it until the dawn of the computer age.  He likens the code to a 'time lock'; namely the type of time lock that could not be opened until modern technology and the advent of the computer provided the key.  It would have taken Newton more years than he had to process all of the numbers to read the code. Today, however, with the processing power of computers; what would have been a long arduous task is now greatly reduced.

Dr Rips utilised the computer in a way that allowed him to develop a sophisticated mathematical model.  This when implemented by computer, confirmed what Newton had suspected all along, i.e. the Bible is encoded.  The name of the original experiment conducted by Dr Rips was called "Equidistant Letter Sequences in the Book of Genesis".  The abstract on the cover page read:

"Randomization Analysis indicates that hidden information is woven into the text of Genesis in the form of equidistant letter sequences.  The effect is significant at the level of 99.998%."

What Dr Rips had in fact done was to eliminate all of the spaces between the words of the Bible, thus turning the book into 304,805 letter.  By doing this Dr Rips was restoring the Torah to what legend says was the way that Moses originally received the Bible from God, 'continuous and without break of words'.  The way in which the code works is very similar to that of a crossword puzzle.  A more detailed explanation of how it actually works is quoted in the book as follows:

"Star at the first letter of the paragraph below, skip every three letters and the code is explained"

"Rips ExplAineD thaT eacH codE is a Case Of adDing Every - fourth, twelfth or fiftieth letter to form a word."

By looking at the capital letters which are spaced three letters apart it is possible to see the hidden message which in fact is READ THE CODE.

The use of a computer enabled Dr Rips to run searches of the letter string for words and phrases which were hidden by the skip code.  A more comprehensive explanation appears on page 14 of the Bible Code book.

"The computer searches that strand of letters for names, words and phrases hidden by the skip code.  It starts with the first letter of the Bible, and looks for every possible skip sequence - words spelled out with skips of 1,2,3, all the way up to several thousand. It then repeats the search starting from the second letter, and does it over and over again until it reaches the last letter of the Bible.  After it finds a keyword, the computer can look for related information.  Time after time it finds connected names, dates and places encoded together - Rabin, Amir, Tel Aviv, the year of his assassination, all in the same place in the Bible.

The computer scores the matches between words, using two tests - how closely they appear together and whether the skips that spell out the search words are the shortest in the Bible.

Rips explained how it works using the Gulf war as an example.  'We asked the computer to search for Saddam Hussein,' he said.  'Then we looked for related words to see if they came together in a way that was mathematically significant.  With the Gulf War we found Scuds with Russian missiles, and the date the war would begin encoded with the name Hussein.

The words formed a crossword puzzle.  Consistently, the Bible code brings together interlocking words that reveal related information.  With Bill Clinton, President.  With the Moon landing, spaceship and Apollo 11.  With Hitler, Nazi.  With Kennedy, Dallas.

In experiment after experiment, the crossword puzzles were found only in the Bible.  Not in 'War and Peace', not in any other book, and not in ten million computer generated test cases.

According to Rips, there is an infinite amount of information encoded in the Bible.  Each time a new name or crossword puzzle is formed.  Related words cross vertically, horizontally and diagonally."

One of the most dramatic examples in the book is that of the aforementioned predicted assassination of Yitzhak Rabin.  On running the program it was found that the words ASSASSIN, WILL ASSASSINATE crossed Rabin's name.  Drosnin states that he tried to warn Rabin, but the predicted event came to pass.  The book contains numerous similar examples, relating to predictions about a possible world war III, President Kennedy's assassination, the fall of communism and much more.  According to Drosnin the code was tried as already noted on large texts including 'War and Peace', but the results could not be replicated in the same way.  This in turn added more weight to the argument that the Bible may in fact be encoded.

The original experiment conducted by Dr Rips can be found in the back of the Bible Code book and it also appears in 'Statistical Science 1994, Vol 9, No 3, 429-438.

Michael Drosnin has written about the Bible Code in a very straight forward and easy to read way, and the theories expressed are forwarded in a highly plausible manner.  Following the success of the 'Bible Code' Michael Drosnin produced the sequel 'The Bible Code II', which like its predecessor makes also for highly interesting reading, certainly giving rise for food for thought.

However as with all theories there are always opponents and it would be unfair to say that the book has not had its fair share of critics. 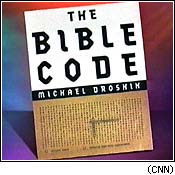 "some of the book's conclusions are being challenged by the Israeli mathematician who led a research team that discovered what he says is the hidden code in the Hebrew Bible, or Torah, on which the book is based.

Orthodox Jews call the first five books of the Bible the Torah. 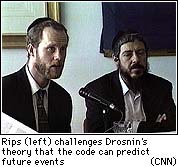 Eliyahu Rips of Hebrew University says it is true that the Bible has predicted various historical events that have come to pass. But he disagrees that the code can be used to predict future events.

"The central claim that you will find in Michael Drosnin's book, and really the whole basis for the book, is ... the idea of him predicting Yitzhak Rabin's assassination and the implication is that you can use this idea, the hidden code in the Torah, to make predictions of the future," Rips said Wednesday through a translator.

"It is literally impossible to make future predictions based on codes. Mr. Drosnin's book does have some examples of codes that are statistically significant, and some that aren't, and the problem is that any layman reading that book will have no way of making a distinction."

"I am not saying that 'The Bible Code' is a crystal ball. You can not say 'Bible, please tell me the future' and find out anything. You have to know what you are looking for to find anything at all.

"And none of us, neither Dr. Rips nor his colleagues, would claim to know the code well enough, to understand it completely enough, that we can be certain about what it says about the future."

Whether or not their is a code in the Bible or just a set of amazing coincidences.  Michael Drosnin puts his case in a convincing way.  At the very least the Bible Code phenomena is one that warrants further inspection.

Useful Links
On Equidistant Letter Sequences in the Book of Genesis